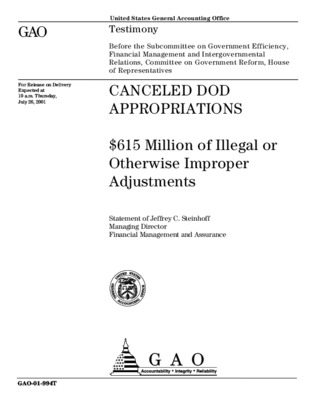 Testimony issued by the General Accounting Office with an abstract that begins "This testimony reviews the Department of Defense's (DOD) handling of appropriated funds from expired appropriation accounts. In 1990, Congress changed the law governing the use of appropriation accounts because it concluded that controls over them were not working. Without adequate controls, Congress was concerned that agencies could disburse money in amounts and for purposes that it had not approved. GAO found that DOD improperly charged appropriation accounts after they were closed. GAO also found that DOD did not establish the requisite systems, controls, and managerial attention required to properly account for its disbursements consistent with the 1990 account closing law, and as a result, DOD made at least $615 million of illegal or otherwise improper adjustments during fiscal year 2000 alone. DOD was aware of the limitations the account closing law placed on the availability of canceled appropriations and that the law was enacted because of previous abuses by DOD's use of old appropriations. DOD also knew that a major system used to control its use of appropriations allowed for disbursements to be charged in a way that was inconsistent with the law. However, DOD did nothing to fix the system, even though the cost to do so was minimal. The $615 million of adjustments GAO identified as illegal or otherwise improper must be immediately reversed. Also, at a minimum, DOD will need to change its systems, policies, and procedures, along with the weak control environment that fostered these practices, and served to perpetuate the problem. This report summarized a July report (GAO-01-994T).