This paper derives the optimal composition of the Brazilian public debt by looking at the relative impact of the risk and cost of alternative debt instruments on the probability of missing the stabilization target. This allows to price risk against the expected cost of debt service and thus to find the optimal combination along the trade off between cost and risk minimization. The optimal debt structure is a function of the expected return differentials between debt instruments, of the conditional variance of debt returns and of their covariances with output growth, inflation, exchange-rate depreciation and the Selic rate. We estimate the relevant covariances by: i) exploiting the daily survey of expectations; ii) simulating a small structural model of the Brazilian economy under different shocks; iii) estimating the unanticipated components of the relevant variables with forecasting regressions. The empirical evidence strongly supports the funding strategy of Brazilian Treasury in 2003 of relying heavily on fixed-rate LTN bonds. It also supports its recent decision to revitalize the market for price-indexed bonds with the new NTN-B program of IPCA indexation. Though decreasing, the exposure to exchange rate risk appears too large suggesting that more efforts should be made to reduce funding in foreign currencies. 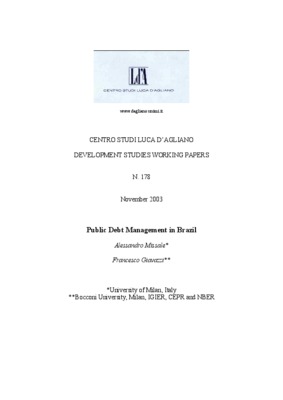