The Impact of Trade Liberalisation on Enterprises in Small Backward Economies: The Case of Chad and Gabon

This paper examines the impact of trade and fiscal reforms and of the 1994 devaluation of the CFA franc on enterprise development in Chad and Gabon. These reforms provide a natural experiment to assess the impact of trade liberalisation in countries with a small and backward manufacturing sector. The empirical analysis is based on a new panel data base covering virtually the whole population of manufacturing firms in Chad and Gabon, and containing data spanning from the year before to two years after the reforms. The paper finds that although firms’ response to changing incentives was non-negligible, with a shift of output from non tradable to tradable and an increase in productivity, the reform process was unable to generate a virtuous and self-sustained circle, where export expansion brings a generalized productivity increase which in turn feeds on further export growth.trade liberalization; enterprise development; output, productivity and export performance 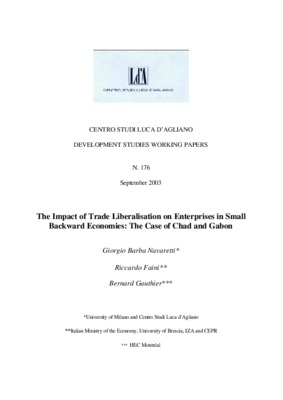