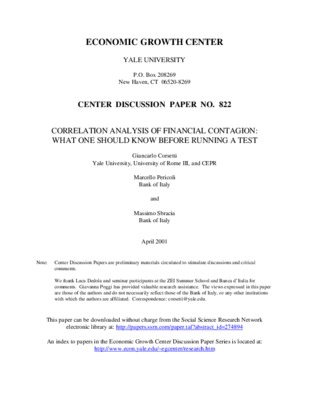 Correlation Analysis of Financial Contagion: What One Should Know Before Running a Test

This paper builds a general test of contagion in financial markets based on bivariate correlation analysis - a test that can be interpreted as an extension of the normal correlation theorem. Contagion is defined as a structural break in the data generating process of rates of return. Using a factor model of returns as theoretical framework, we nest leading contributions in the literature as special cases of our test. We show that, while the literature on correlation analysis of contagion is successful in controlling for a potential bias induced by changes in the variance of global shocks, current tests are conditional on a specific yet arbitrary assumption about the variance of country specific shocks. Our results suggest that, for a number of pairs of country stock markets, the hypothesis of 'no contagion' can be rejected only if the variance of country specific shocks is set to levels that are not consistent with the evidence.