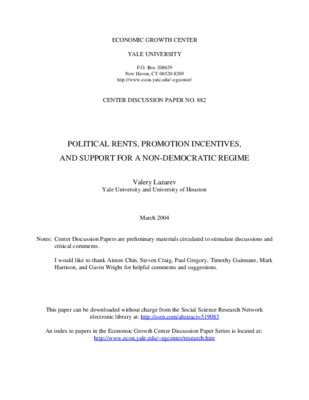 Political Rents, Promotion Incentives, and Support for a Non-Democratic Regime

This paper analyzes the economic foundations of a non-democratic political regime, where the ruling bureaucracy captures rents through collective control over state property and job assignment. The model developed here yields the equilibrium in the "political labor market," where the ruling bureaucracy buys services and political support of activists recruited from the working population. The underlying implicit contract requires that the incumbent bureaucrats retire after a certain time to allow for deferred promotion of activists into rent-paying positions. The major implications are that the stability of a non-democratic regime is consistent with high-income gap between the rulers and the rest of the population, strengthened when government pursues an active investment policy, and is not directly affected by public goods provision or the rate of economic growth. The results of econometric analysis of panel data from former Soviet states for the period of 1956-1968 confirm the predictions of the model.non-democratic regimes, bureaucracy, hierarchy, political support, promotion incentives, implicit contract, Soviet Union