Innovation in commercialization of pelagic fish: the example of "Srdela Snack" Franchise

The consumption of fish in Croatia is relatively low for a Mediterranean country. One of the main reasons for this is the inadequate supply of fish. The supply of fish is usually limited to expensive species of whitefish, while the supply of pelagic fish is very scarce. Pelagic fish can rarely be found in restaurants, and in the fish- markets it reaches very high prices. The basic goal of the project "Srdela Snack" (srdela - Croatian word for sardine) was to set up and test a new model of commercialization of pelagic fish through franchise "fast - food" outlets. In the paper we will describe the concept of this new model which includes the whole distribution channel, from fishermen, through processors, restaurants to consumers. In this model fishermen supply fresh pelagic fish to approved restaurant s (members of the franchise) which prepare the fish according to traditional recipes. In this way a completely new product is introduced in the Croatian market. The main idea was to offer a high- quality, simple and convenient meals made of pelagic fish from the Croatian Adriatic. This model of commercialization of pelagic fish was tested through a pilot project. In the pilot project the standards of food quality were determined, the traditional recipes for preparing the food were selected, and the menu, consisting entirely of pelagic fish dishes was made. Finally, the logo of the franchise restaurant was designed. The test restaurant was opened in the summer 2004. The visitors of the restaurant participated in a survey which was used to determine the degree of their satisfaction with the new product and the new model of pelagic fish commercialization. The results of the survey showed that there is a strong demand for pelagic fish in the Croatian market. Most of the interviewed consumers liked the new product; they consider it very healthy, affordable, tasty, and typical for Mediterranean and Croatia. Fishermen and restaurant - owners also showed a great interest for this new model of commercialization because it could provide them with a bigger income. Since the results of the pilot project showed that this kind of innovation in the distribution channel is very successful, this model of franchise restaurants offering pelagic fish "fast - food" can be implemented on the national level.Innovation, Commercialization, Pelagic fish, Franchise, Agribusiness, 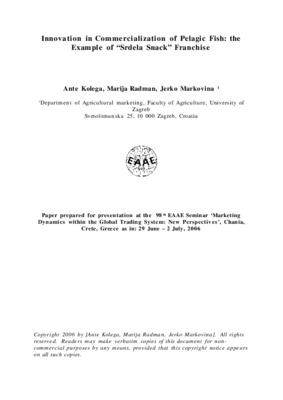