The study presented the scale of foreign direct investments in Poland in the years 1993- 2004. It was found out that these investments related both to production and financial, commercial and logistical activity. A considerable part of investments was made in the agricultural and food industry, especially in the first years after the transition from a socialist economy to a market economy. The greatest resources were invested in the tobacco industry and then in the production of sweets and beverages. As a result of research it was found out that the agricultural and food industry in Poland developed dynamically after the transformation, both increasing the value of production and investing more than the consumption of fixed assets amounted to.foreign direct investments, agricultural and food industry., Agribusiness, 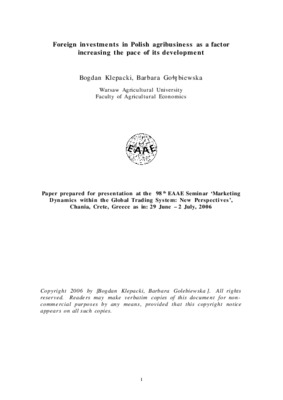