During the last decade the Cypriot agricultural sector has been declining in terms of most indices in the economy, mainly due to the spiraling growth of tourism, as crucial investment outlays were diverted from agriculture to tourism; the most important factors of production being land and labor due to substantially higher yields accruing to both. The Domestic Resource Cost (DRC) revealed that the three products studied for the period 1997 to 2000, i.e. tomatoes, oranges and olive oil had a comparative advantage. However, the opening of the European market with EU accession led to the substantive undermining of competitiveness of agricultural products and to the reduction of the value of exports. It is believed that DRC ratios would be higher today that the ones reported, due to unchanged /decreased border prices and increased costs of tradable inputs. It is suggested that the tomato, orange and olive oil sectors will become more competitive in the European market if factors that are affecting their marketing, like differentiation of production and quality, are improved. New concepts like organic farming and products of origin are very important and may provide profitable outlets in the new globalized economy. Additionally, favorable climatic conditions are vastly for and conducive to the production of early season Mediterranean products with obvious premium attached in the market place.Domestic Resource Cost, Competitiveness, Tomatoes, Oranges, Olive Oil, International Relations/Trade, 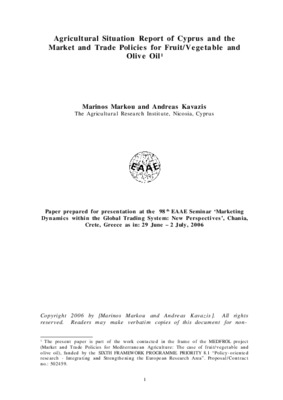