For two decades agriculture has been the lynchpin of every meeting of the world's trade ministers. The Hong Kong ministerial conference of the World Trade Organization (WTO) in December 2005 was no different. Once again, a multilateral trade round is blocked by failure to agree on reform of farm trade, a traditional sector representing less than 10% of world merchandise trade. But the current round differs from earlier rounds: a number of new political coalitions have formed, unformed and reformed, and the role of Canada seems obscure. The usual approaches to explaining international economic outcomes consider political economy factors. In this paper I ask if institutional factors are part of the problem, or the solution.International Relations/Trade, 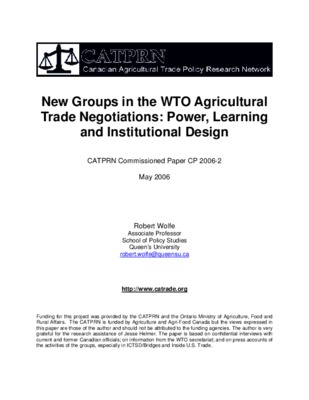