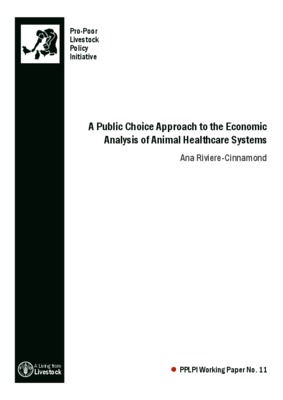 By Ana Riviere-Cinnamond
Get PDF (210 KB)

Privatisation of animal healthcare systems in developing countries, particularly in sub-Saharan Africa, has had very limited success. Introduced with inadequate transition time and too few resources, many livestock owners either cannot afford or, just as likely, are unable to gain access to the services they need. Poor livestock owners in remote rural areas suffer the greatest disadvantage. This fact is undisputed but, since privatisation, the primary focus has been on analysing the performance of animal healthcare systems and few authors have studied the underlying economic theories that have driven privatisation policy nor examined in what ways these may have been detrimental. This working paper examines how the economic analysis of animal health services has evolved since the '90s. A comparison is made with economic theories underlying the provision of human healthcare services where the debate started much earlier (in the '60s). Special emphasis is put on how these perspectives have influenced privatisation policy and, in particular, based in general economic literature, how the way in which 'public goods' is defined affects their financing and provision. Following this perspective, the role that governments should expect to play in the animal healthcare sector post privatisation is also debated. A relatively new approach to the economic analysis of animal health services is therefore presented, one that has been propounded recently by a number of economists working in this field. This economic theory, based on the perspective of 'public choice' argues that the process of decision-making may be highly significant in influencing efficiency and effectiveness. Traditional 'outcome' analysis omits factors such as self-interested behaviour and political interference. These may have contributed to higher than expected 'transaction' costs and, therefore, to the failure in many instances of the privatisation process. Given that much greater attention than in the past should be paid to issues of governance, governments in future may expect to act not only as external agents with regulatory power but as part of the nation's animal healthcare system with responsibility for defining overall goals and harmonising and facilitating the market economy.Animal health services, privatisation process, market failure, taxonomy of goods, poor livestock keepers, developing countries, community animal health workers, Livestock Production/Industries,