This study asks the question, what is the relationship between traditional models of market power and structural auction models? An encompassing model is derived that considers both price markdowns due to bid shading during an auction and price markdowns at the industry-level due to imperfect competition. Data from a cattle procurement experimental market is used to compare the appropriateness of the two alternative theories. Regression results show that while the number of firms is more important than the number of bidders on lot of cattle in explaining pricing behavior in the game, the number of bidders does contain some unique information and should be included in the model. Both the traditional NEIO and structural auction approaches overestimated the true markdowns possibly due to failure to account for the winner's curse.Marketing, 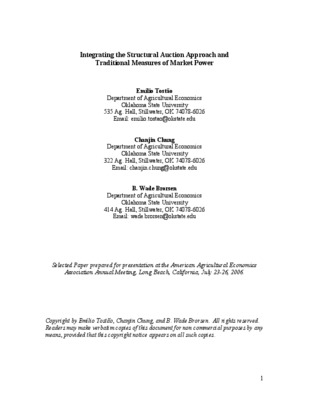