Societies which structure themselves having the purchase and selling of work as the central dimension of social life find themselves in the middle of a crisis. The job market is not, and could never be, the only space of social work allocation, otherwise the activity which produces utility values, a reproducer of the cultural and social identity, organized under principles other than those of the valorization of capital, may collapse, imploding society's very own structure. The growth of non-formal work activities is but one of the most explicit signs of the functioning of the tradevalue producing activity when it submits and models the formerly formal work activity now newly shaped. Informal work, made visible by theories which would formerly identify it as a group of archaic relations or as having been produced by irrational social agents, thus destined to vanish, is itself provoked and made into a reference model to all forms of work. Formal work loses some of its space and centrality due to the uncountable labor-law reformations around the world gaining informal contours, but seeking to become formal. In short, formal work is replaced by the informal kind which is the result of the rational economic agents' coming up with strategies to escape the state's regulatory proceedings.formal work, non-formal work, non-formalizing processes, state power crisis, tertiary sector, 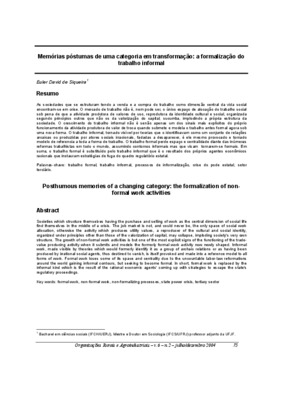