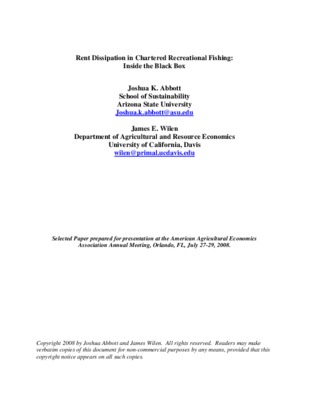 Rent Dissipation in Chartered Recreational Fishing: Inside the Black Box

A canvass of the resource economics literature of the last thirty years yields a limited number of applications of economic theory to the problems of recreational fishing, especially compared to the depth of contributions to commercial fisheries over this era. This neglect may be linked to the relatively short shrift given to the control of recreational fisheries (relative to commercial fisheries) by fisheries managers in the past. This asymmetry may be justified when recreational takes are sufficiently small to be negligible for the purposes of stock management. However, it has become increasingly clear that recreational mortality, far from being insignificant, is often comparable to or greater than the commercial mortality for many species (Coleman, et al., 2004). With fisheries managers scrambling to find solutions for the control of recreational mortality, economists have entered the policy arena promoting innovative rights-based policies that are grounded in the past successes of economic prescriptions for the management of commercial fisheries (Johnston, et al., 2007, Sutinen and Johnston, 2003). Despite the merits of these proposals, there remains a sense that findings from the commercial fishing experience may not be as immediately transferable to recreational settings as often imagined. In the first place, our understanding of the mechanisms of the rent dissipation process under open access is imperfect at best. Experience from the rationalization of commercial fisheries has yielded many surprises, with drastic behavioral changes occurring at unanticipated margins (Wilen, 2005). These experiences demonstrate the inadequacies of simple single-factor models in capturing the complexities of real-world rent dissipation. Second, while the recreational for-hire sector may seem similar to commercial fisheries operations in many ways, there are key differences that may limit our ability to readily transfer knowledge from commercial rationalization programs. These observations point toward the need for a more developed theoretical foundation in order to make sense of recreational fishery rationalization programs - such as those under consideration for the Gulf of Mexico - and their likely effects. As a step along this path, we develop a simple bioeconomic model of optimal and open access management for a for-hire recreational fishery. We restrict our attention to the for-hire sector for three reasons. First, charter and headboat trips are a substantial part of total fishing effort for many species and often contribute in a significant way to many coastal economies. Second, given the relative ease of observing fishing activities on for-hire vessels compared to solitary fishing trips, they are widely considered easier targets for regulation and are thus likely to be of some importance in recreational fisheries policy making over the near horizon. Finally, as we shall demonstrate, the interaction of consumer preferences with the supply behavior of vessel owners creates the potential for an array of fascinating distortions and feedbacks with great relevance for fisheries policy. Our model rests upon elements of the bioeconomic framework pioneered by McConnell and Sutinen (1979) and Anderson (1993). However, it extends their approach by incorporating a realistic and flexible theory of the choice of inputs of the for-hire fishing firm. This synthesis of traditional analytical bioeconomics with a production economics treatment of firm behavior is unique, both in commercial and recreational fisheries applications. Combining the supply and demand sides of the problem allows us to examine the long run distortions arising under open access in a manner that reflects feedbacks between angler preferences and the decisions of vessel owners. We find that open access conditions in charter fisheries lead to numerous distortions including excess investments in catch-augmenting inputs on vessels, excessive catch of target species and excessive entry of vessels (resulting in idle vessel capacity for a potentially substantial portion of the season). More subtle perverse incentives include the presence of too few anglers per vessel (due to incentives to reduce losses to catch rates due to congestion), possible underinvestment in valuable but non catch enhancing factor inputs and an incentive for anglers to land an excessive fraction of their catch to the detriment of the future stock. Many of these findings are reflective of recreational fisheries in the Gulf of Mexico and elsewhere. We then utilize our model to consider various options for the rationalization of chartered recreational fisheries. Interestingly, achieving the first best outcome requires a minimum of two policy instruments, a tax/quota on fishing mortality and a levy/quota on entry. The levy on entry is necessary to prevent new entry into a profitable fishery where all charter boat owners are fully employed leading to a situation of less than full employment of vessel capital and the inflation of industry-wide fixed costs. We discuss at length the problems of monitoring and enforcement for a system of tradable landings and discard quotas and discuss the merits of a single-quota system based on a single estimated mortality variable where both landings and discards are, to some degree, observable. Under this system, fishermen are able to exchange landings quota for discards at a prescribed relative mortality ratio. Vessels vie for certification into a discrete number of mortality classes (and thus discard/landings exchange ratios) based upon easily observed factors such as enforcement of quick catch and release behavior, use of gears with lower mortality characteristics and the employment of accepted post-catch techniques to enhance survival. Vessel owners would face positive incentives to achieve a high degree of certification because doing so would allow them to generate a greater number of landings for a given holding of mortality quota. This increases the effective number of anglers the vessel can serve with their holdings thus leading to an increase in the asset value of their quota - a gain they can capitalize on directly by serving more anglers or, indirectly, by selling their surplus quota.Resource /Energy Economics and Policy,