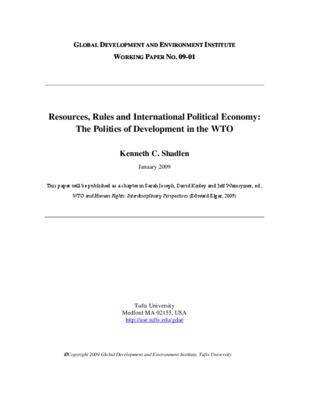 09-01 "Resources, Rules and International Political Economy: The Politics of Development in the WTO"

This paper examines the contemporary politics of intellectual property (IP) and investment in the World Trade Organization (WTO). I examine the underlying and perennial conflicts that pit developing and developed countries against each other in these two areas and the nature of the two agreements reached during the Uruguay Round, the Agreement on Trade-Related Aspects of Intellectual Property Rights (TRIPS) and the Agreement on Trade-Related Investment Measures (TRIMS). I then analyze developed countries’ efforts to push beyond the TRIPS and TRIMS agreements, and, critically, developing countries’ success in forestalling these efforts. Developing countries have “prevailed” in the current international conflicts over IP and investment not by securing rules that they desire, but rather by preventing the imposition of arrangements that they regard as worse than the WTO status quo. To understand how weak countries have managed to overcome developed countries’ IP- and investment-related campaigns and thus prevail (even in the qualified sense) in an important international setting like the WTO, I draw on the insights from two approaches to the study of international political economy (IPE), structuralism and institutionalism. The structuralist approach focuses on the distribution of resources as the key determinant for explaining international outcomes, while the institutionalist approach focuses on the effects of rules. What we see is that, within a broad set of constraints that is determined by the distribution of resources, the rules of the WTO drive the outcomes. In particular, the WTO’s rules of unweighted voting and consensus decision-making have inflated developing countries’ influence in the post-Uruguay Round setting and allowed them to block the efforts of wealthier countries to impose new constraints on national policy in the areas of IP and investment. In the concluding section I address a subsequent question that logically follows from the analysis: why, if developing countries can block developed countries’ initiatives now were they unable to do so during the Uruguay Round?