Voluntary public unemployment systems are limited to a handful of countries, including Finland, Sweden, and, more substantially, Denmark. A voluntary system has the positive feature of other user-cost schemes, potentially efficient targeting of services. This presumes rational behavior as well as reasonable risk rating of premiums and the absence of worker access to alternative social programs. Using a 10% sample of the Danish population drawn from administrative data, we exploit the voluntary Danish system to explore the structure of unemployment insurance demand. The insurance take-up rate is surprisingly high, 80 percent in 1995, but varies systematically with economic incentives in a way that raises doubts about the targeting value of the current system. Political support for the Danish system may derive instead from the fact that a universal, compulsory system would generate rather modest additional net funds and with a twist--additional revenue would come disproportionately from low-wage workers. 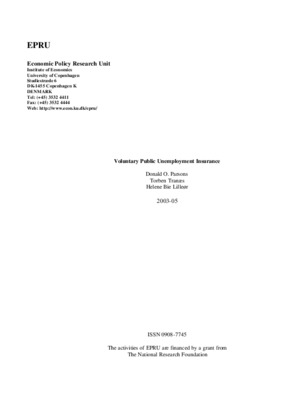