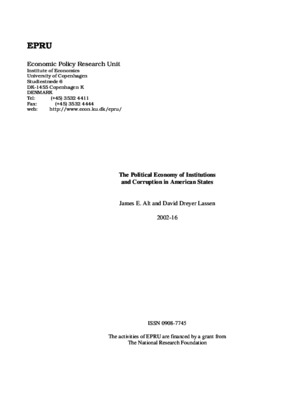 The Political Economy of Institutions and Corruption in American States.

Theoretically, this paper draws on political agency theory to formulate hypotheses. Empirically, it shows that political institutions have a role in explaining the prevalence of political corruption in American states. In the states, a set of democracies where the rule of law is relatively well established and the confounding effects of differing electoral systems and regimes are absent, institutional variables relating to the openness of the political system inhibit corruption. That is, other things equal, the extent to which aspiring politicians can enter and gain financial backing, and to which voters can focus their votes on policies and thereby hold incumbent politicians accountable for policy outcomes and find substitutes for them if dissatisfied with those outcomes, reduce corruption as a general problem of agency. These institutional effects are estimated in the presence of controls for variables representing other approaches.