In this paper we consider a risk averse worker who is moving back and forth between employment and unemployment; layoffs are random and beyond the worker's influcence, while the re-employment chance is directly affected by search effort. We characterize the worker's optimal savings and job-search behavior as well as the resulting consumption paths and wealth formation. In general, all decisions will depend on the current level of wealth: First, the choice of search effort increases as wealth decreases; a finding which is in accordance with our empirical duration analysis using micro data on unemployment spells. Second, consumption increases with wealth both when the worker is employed and unemployed. Third, savings provide insurance against income fluctuations but this insurance is not perfect; precautionary savings are built up during employment spells and run down during unemployment spells but the consumption path is never going to be completely smooth over states. Finally, our results suggest that the worker's search intensity and hence the probability of leaving unemployment will exhibit positive duration dependence over unemployment spells via its inverse relationship with the worker's wealth. 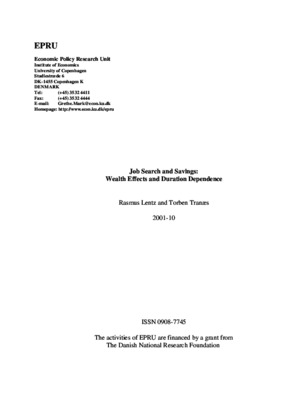