This paper is aimed to examine how individual unemployment is influenced both by location in a deprived neighborhood and public housing. Of course, measuring neighborhood effects raises the issue of location choice endogeneity, which generates correlated effects (Moffitt, 2001; Durlauf, 2004). Indeed, individuals with similar socio-economic characteristics, labor-market outcomes, and unobservable traits tend to sort themselves into certain parts of the urban space. In this paper, we investigate the possibility to deal with endogeneity of location choices by means of a non-linear model, that offers conditions under which group effects may be identified (Brock, Durlauf, 2003 and 2004). Specifically, in a preliminary data analysis step, we classify neighborhoods as deprived or not deprived and then estimate a simultaneous probit model of (i) public housing accommodation, (ii) type of neighborhood, and (iii) unemployment, allowing for non-zero correlations between the error terms of the three equations. The large share of public housing units in France and their concentration in poor neighborhoods, where they may represent as much as two thirds of housing units, allow us to use public housing accommodation as a powerful determinant of location in these neighborhoods. Estimations of this simultaneous probit model by simulated maximum likelihood are performed on a sample of approximately 10,000 individuals, taken from the 1999 French Census and representing about five percents of households' heads participating in the labor-market in Lyon, the third largest city in France. Our results show that public housing does not have any direct effect on unemployment. However, living within the 35% more deprived neighborhoods does increase the unemployment probability significantly. Our estimate is comparable to that Topa (2001) obtained for Chicago. As expected, the effect of neighborhood substantially decreases when dealing with the endogeneity of neighborhood and when using public housing as a determinant of neighborhood choice. 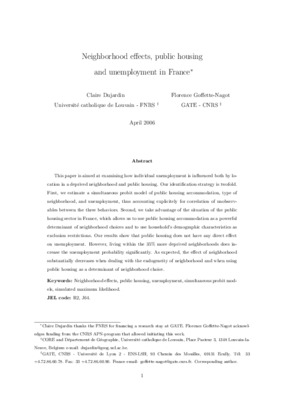