Enterpreneurship and problems of specialists training in Ukraine

Not long ago the social-economic system, we have lived in, did not allow the possibility of enterpreneurship. Now all restrictions have been lifted. How did Ukrainian economy and Ukrainian system of higher education respond to this situation? Majority of large state industrial enterprises are in disastrous conditions. Main reasons are: a crisis of non-payment, an absence of circulating assets, non compatibility of production, lack of sale markets, managers' low qualification and others. The process of privatisation is running slowly, painfully and it often does not give the expected results. Enterprises of small and middle business, especially of industrial profile, do not yet up on feet and they do not play appreciable part in total volume of production. The economical situation in Zhytomyr region, one of the regions of Ukraine, is presented as an example. At the same time the best traditions of national higher education have been saved. On the beginning of the 1997/98 academic year the 1,5 millions of students was studying in different higher educational institutions, the 400 thousands of them - on the first course. In 1991 radical democratic steps were been taken in Ukrainian education. In the State Law "About Education" was legally secured (1) the possibility of existence the private educational establishments based on a non-state form of property and (2) the education being obtained not only by the state-budget expenses, but out of local budget expenses, budgets of ministries, certain enterprises or individuals. Now about 5 % of students are studying in non-state institutes and about 20 % of students of state institutes are studying on the basis of contracts between educational institutions and certain enterprises or individuals with full compensation of educational expenses. Some peculiarities of the Ukrainian system of higher education functioning under conditions of transition to market economy are to be considered on the example of Zhytomyr Institute of Engineering and Technology (ZIET), - state, - and Institute of Enterpreneurship and Modern Technologies, - private. Thanks to ZIET activities that in 1997 it had own financing over 70 % of its budget (in 1992 - only 3,6 %). Institution funding helped to stabilise it's financial state, lessened the dependence of the reduced amounts of state funding and the chronic delays that occur in receiving those funds. The basic problems of the higher education institutions at the present time are: ? Collapse of many enterprises creates difficulties for training and using the future engineers. ? Insolvency of many enterprises, delays in payment of wages and the growing poverty of the population having resulted in the financial bankruptcy and the appearance of huge debts before educational institutions. ? Absence of clients for scientific researches and elaboration. ? Limited international contacts. ? Resrticted financial possibilities and backwards of the telecommunication technical appliances that all make difficult for our absolute enter into the global informational space (Internet, Web Side and so on). 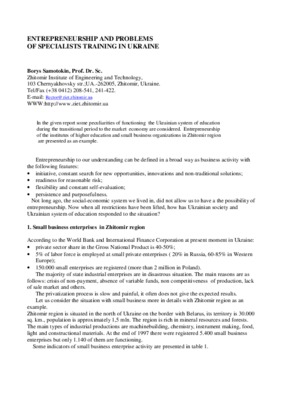