This paper reports original research on job seekers in two contrasting rural areas in Scotland: one a remote rural area; the other semi-rural with strong metropolitan connectivity. It seeks to answer two key questions. Firstly, what are the potential benefits and barriers associated with the delivery of services for rural job seekers through the use of Information and Communications Technology (ICT)-based systems? And following from this, what is the nature and extent of the 'digital divide' affecting unemployed job seekers and what policies are required to address this problem? Rural labour markets in the United Kingdom, like those across Europe, have recently experienced a period of continuous and rapid change. The decline of primary sector industries has been accompanied by increases in service employment, especially in tourism. However, in the UK, as elsewhere, this economic transition has not been without its difficulties. Whilst social exclusion is less prevalent in rural areas than in many cities, instances f poverty remain. Unemployment, and particularly long-term unemployment, has been cited as an important factor explaining the continuing problem of social exclusion in many rural areas. Recent research has suggested that an important barrier to work faced by unemployed people in rural areas relates to the absence of locally-based job search and advice services. The Employment Service (the main public agency in the UK dealing with job seekers) has argued thagiven the remote and sparsely populated nature of many rural labour markets, ICT-based job search and advice services (e.g. delivered through telephone helplines and the Internet) may offer the most efficient and cost-effective policy solution in many areas. However, the viability of this policy is dependent on the level of ICT awareness and access among job seekers. Interviews were conducted with over 400 job seekers in the two areas. The Caithness and Sutherland area in northern Scotland is among the most remote and least densely populated in Europe, with unemployment rates well above the national average. West Lothian, in contrast, is situated near to Scotland's economic centre and is a major centre of manufacturing activity with unemployment below the national average. The interviws examined the level of ICT skills possessed, attitudes towards and access to ICT, and additionally collected information on a range of personal skills and attitudes. Evidence of relatively low levels of ICT awareness and access was found in both communities Although those residing in the more remote study area were also more likely to have Internet access, a significant minority did not even have access to a telephone at home. The paper concludes that, if ICT is to prove to be the waforward in delivering services for job seekers in rural areas, community-based access and support facilities must be provided, along with appropriate training for job seekers in basic and higher level ICT skills. 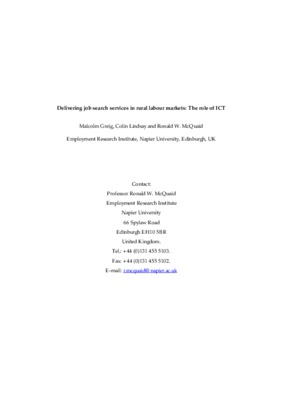