Road pricing policies are, after a cooling down period of a couple of years, again prominently back on the political agenda in the Netherlands. But also in the period of less political interest, research in the field of (road) pricing policies continued in other countries as well as in the Netherlands. Most research literature focuses on the economic and acceptability aspects of pricing policies. The geographical aspects of transport pricing however have received much less attention so far. This paper focuses on possible influences of road pricing policies on residential and work location choice of households. The paper starts with analyzing the importance of transport and location related variables in residential location decisions, when the choice to relocate itself has been made. For this analysis data from a stated choice experiment is used. Choice screens within the experiment consisted of two alternatives. In total, per respondent nine choice screens were shown. Transport related variables within the experiment were commuting travel time, fuel cost and toll cost. The location related variables consisted of the residential environment, the number of bedrooms and the monthly housing costs. Analysis of the results gives insight into the importance of for example toll costs on the final location choice when a decision to relocate itself has already been made. However this type of analysis does not give insight into the number of people who are actually considering changing location when a form of road pricing is introduced. Therefore the second part of the paper continues with analyzing the extent to which people are likely to relocate due to road pricing. The effect of different types of pricing measures and pricing levels on this inclination to relocate are examined. For the analysis, data from a stated preference questionnaire is used. The paper finally concludes with an examination of important explaining variables for moving house or changing job due to road pricing. Some important findings are for example that older people (above 40 years of age), people with a higher income and persons getting a travel cost compensation from their employer are less willing to move due to a pricing measure. People with a higher education level however are more willing to relocate. 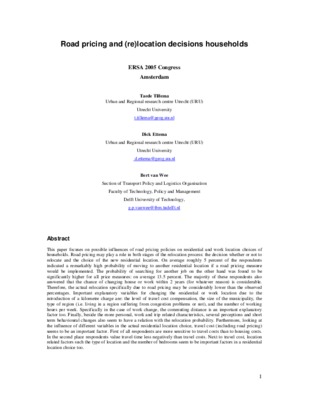