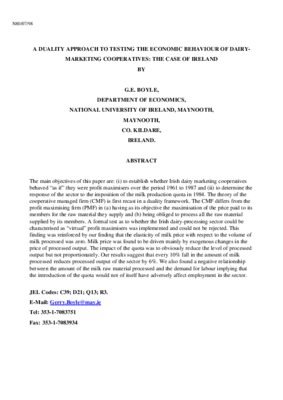 A Duality Approach to Testing the Economic Behaviour of Dairy-Marketing Co-operatives: The Case of Ireland

The main objectives of this paper are: (i) to establish whether Irish dairy marketing cooperatives behaved "as if" they were profit maximisers over the period 1961 to 1987 and (ii) to determine the response of the sector to the imposition of the milk production quota in 1984. The theory of the cooperative managed firm (CMF) is first recast in a duality framework. The CMF differs from the profit maximising firm (PMF) in (a) having as its objective the aximisation of the price paid to its members for the raw material they supply and (b) being obliged to process all the raw material supplied by its members. A formal test as to whether the Irish dairy-processing sector could be characterised as "virtual" profit maximisers was implemented and could not be rejected. This finding was reinforced by our finding that the elasticity of milk price with respect to the volume of milk processed was zero. Milk price was found to be driven mainly by exogenous changes in the price of processed output. The impact of the quota was to obviously reduce the level of processed output but not proportionately. Our results suggest that every 10% fall in the amount of milk processed reduces processed output of the sector by 6%. We also found a negative relationship between the amount of the milk raw material processed and the demand for labour implying that the introduction of the quota would not of itself have adversely affect employment in the sector.co-operative; duality theory; initial profit maximisation; production quotas