The structural fund interventions play a crucial role in improving the social and economic cohesion of the EU. A particular focus of the structural funds is on those regions that lag behind to the extent that their GDP per capita is below 75 per cent of the EU average ? Objective 1 regions. In 1999 these regions accounted for 25 per cent of total EU population, and in general they are poorly endowed in a number of areas, such as infrastructure, human capital, and modern high productivity industries and services. As a consequence, they tend to have higher rates of unemployment. The amount of investment that is funded though the structural funds by the EU is substantial (?103 billion over the period 1994 to 1999 for Objective 1 regions). Given their size and significance, EU legislation requires the appraisal of the structural funds. However, while systematic monitoring and evaluation frameworks are available at the national level and at the project level, a rigorous and systematic method for quantifying the socio-economic impacts of structural fund interventions on the regional economies has not been developed to the same extent. Thus, policy-makers seldom have access to accumulated research on the macroeconomic and macro-sectoral performance at a regional (NUTS II) level, which would allow them to assess the overall impact of the structural funds. One modelling framework ? HERMIN - has been widely applied to Structural Fund analysis at the national level (Greece, Ireland, Portugal, Spain, Estonia, Latvia) and macro-regional level (East Germany and Northern Ireland). In this paper we review the theoretical foundations of this modelling approach, outline its application and highlight the results from the application of the HERMIN modelling framework to structural funds evaluation. This review will highlight not only the strengths of the approach but also the weaknesses and areas for further research. The theoretical underpinning of the HERMIN model is that of a small open economy model with a Keynesian role for domestic demand. The HERMIN framework is designed as a macroeconometric model composed of four sectors: manufacturing (a mainly traded sector), market services (a mainly non-traded sector), agriculture and government (or non-market) services. This level of disaggregation is the minimum necessary to identify the key sectoral shifts in a developing (regional) economy over the years of the Structural Funds programme. The model incorporates the mechanisms through which the Objective 1 national or regional economy is inter-connected to the external world, and most importantly it incorporates mechanisms through which the Structural Funds impact on the economy in the short and long-run. It therefore captures not only the short run Keynesian demand effects but also the long-run supply side effects. 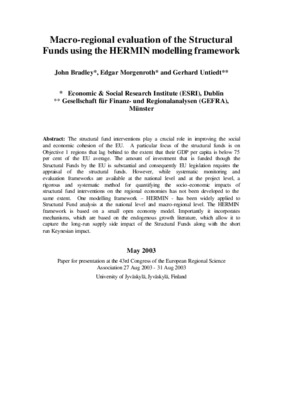