Ex post analysis of the regional impacts of major infrastructure: the Channel Tunnel 10 years on.

The regional impact of transport infrastructure investment has achieved considerable attention across Europe in recent years. The construction of major bridges and tunnels to overcome natural barriers and the development of the trans-European networks has led to large volumes of research on the likely economic impacts of such investment on neighbouring regions. Most of these studies are ex ante studies undertaken as part of the decision process into the investment, either on the part of the project promoter or the affected regions. At the same time there has been a continuation of interest in the broader question of the wider economic benefits arising from transport improvements at a more aggregate level; whether and under what circumstances such benefits do arise, and if so how they can be incorporated in any evaluation. As a recent study by Flyvbjerg et al (2003) has shown, the claims made for the returns on major projects have tended to be exaggerated, both in terms of underestimates of likely costs and overestimates of potential direct traffic benefits. This paper provides a relatively rare example of an ex post study of what impacts one of the major recent infrastructure projects has had on the local and regional economy by looking at the experience of the Channel Tunnel after its first ten years of operation. The paper reviews the methodological issues in carrying out an ex post study and assembles evidence related to traffic, labour market, investment and development impacts compared to the ex ante expectations. The main methodological issue is in establishing the counter-factual position of how the regional economy would have developed in the absence of the tunnel. A substantial volume of traffic would have continued to have passed through the region’s ports using the ferries which would have required continuing investment over this period. This has been a period also in which major changes have occurred in the EU economy with the move to completion of a Single Market. Many of the driving forces of the regional economy come from the adjacent London metropolitan region. The approach adopted has been to examine trends in the regional economy relative to those in the wider regional and national economies in both the UK and France. There are two basic questions: to what extent would traffic have continued to grow at the rate experienced in the absence of the tunnel infrastructure; and has tunnel related traffic had a differential impact on the local economy from a similar volume of ferry traffic? The paper examines in detail the volume and structure of traffic and compares these with ex ante traffic forecasts; trends in the local labour markets in terms of the growth of job opportunities, occupational structure and the evolution of unemployment; investment (including foreign investment) in the regional economy; and the development and execution of plans for physical development in the region. The paper concludes that although much has changed in the region following the completion of the tunnel, it is difficult to identify a significant difference in the aggregate performance relative to the wider regional and national experiences. Essentially, the improvement of transport infrastructure has enabled the regions to be more integrated into their wider regions and experience a similar economic performance, but whether this has led to a better performance is more difficult to determine. 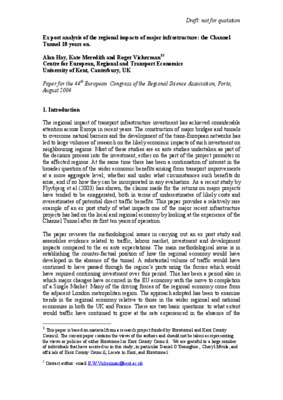