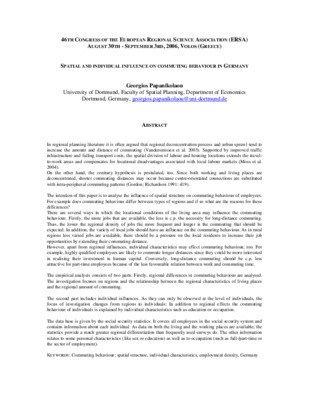 Spatial and Individual Influence on Commuting Behaviour in Germany

By Georgios Papanikolaou
Get PDF (638 KB)

In regional planning literature it is often argued that regional deconcentration process and urban sprawl tend to increase the amount and distance of commuting (Vandersmissen et al. 2003). Supported by improved traffic infrastructure and falling transport costs the spatial division of labour and housing location extends the travel-to-work areas and allows to compensate for locational disadvantages of local labour markets (Moss et al. 2004). On the other hand, the contrary hypothesis is postulated, too. Since both working and living places are deconcentrating shorter commuting distances may happen because centre-orientated connections are substituted by intra-peripheral commuting patterns (Gordon; Richardson 1991: 419). The intention of the paper is to analyse the influence of spatial structure on commuting behaviour of employees: e.g. does commuting behaviour differ between type of regions and what are the reasons for these differences? There are several ways how the locational conditions of the living area may influence the commuting behaviour. Firstly, the more jobs are available, the less is c.p. the necessity for long-distance commuting. Thus, the lower the regional density of jobs the more frequent and longer commuting should be expected. In addition, the variety of local jobs should have an influence on the commuting behaviour. As in rural regions less varied jobs are available, there should be a pressure on the local residents to increase their job opportunities by extending their commuting distance. However, apart from regional influences, individual characteristics may effect commuting behaviour, too. For example, highly qualified employees are expected to commute to longer distances since they could be more interested in realizing their investment in human capital. Conversely, long-distance commuting should be c.p. less attractive for part-time employees because of the less favourable relation between work and commuting time. The empirical analysis consists of two parts: Firstly, regional differences in commuting behaviour are analyzed. The focus of investigation lies on regions and the relationship between the regional characteristics of living places and the regional amount of commuting. The second part includes individual influences. As they can only observed at the level of individuals, the focus of investigation changes from regions to individuals: In addition to regional effects the commuting behaviour of individuals is explained by individual characteristics such as education or occupation. The data base is given by the social security statistics. It covers all employees in the social security system and contains information about each individual. As data on both the living and the working places are available, the statistics allows a much greater regional differentiation than the frequently used surveys. The other information relate to some personal characteristics (like sex or education) as well as to the occupation such as full-/part-time or the sector of employment.