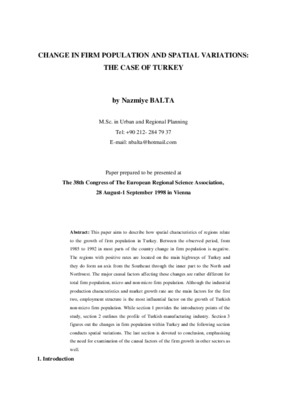 Change in firm population and spatial variations: The case of Turkey

This paper aims to describe how spatial characteristics of regions relate to the growth of firm population in Turkey. Between the observed period, from 1985 to 1992 in most parts of the country change in firm population is negative. The regions with positive rates are located on the main highways of Turkey and they do form an axis from the Southeast through the inner part to the North and Northwest. The major causal factors affecting these changes are rather different for total firm population, micro and non-micro firm population. Although the industrial production characteristics and market growth rate are the main factors for the first two, employment structure is the most influential factor on the growth of Turkish non-micro firm population. While section 1 provides the introductory points of the study, section 2 outlines the profile of Turkish manufacturing industry. Section 3 figures out the changes in firm population within Turkey and the following section conducts spatial variations. The last section is devoted to conclusion, emphasising the need for examination of the causal factors of the firm growth in other sectors as well.