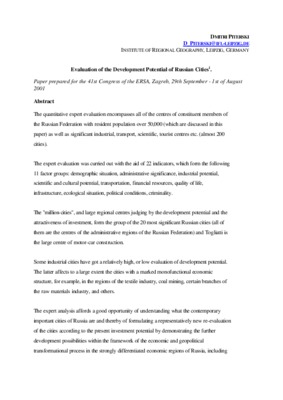 Evaluation of the Development Potential of Russian Cities

By Dmitri Piterski
Get PDF (55 KB)

The quantitative expert evaluation encompasses all of the centres of constituent members of the Russian Federation with resident population over 50,000 as well as significant industrial, transport, scientific, tourist centres etc. (almost 200 cities). It is important to emphasise that the Russian urban settlement system has developed in the past decades primarily on the basis of state central planning without any evaluation of the development potential of specific cities and centres. The expert evaluation was curried out within the framework of the scientific Project at the Institute of Regional Geography in Leipzig "Change of significance of the urban settlement system in Russia after the collapse of the Soviet Union” with the aid of 22 indicators, which form the following 11 factor groups: demographic situation (including regionally differentiated effects of migrations to the cities), administrative significance (including changes within the hierarchical central system), industrial potential (The Russian urban settlement system was, to a large extent, dependent upon the process of industrialisation of the country), scientific and cultural potential, transportation (including effects of the new state borders which change the significance of border and port cities), quality of life, infrastructure, ecological situation, political conditions, criminality. The „million-cities“, judging by the development potential and the attractiveness of investment, form the group of the most significant Russian cities (13 regional metropolises, among them Moscow, St. Petersburg, Nizhniy Novgorod, Novosibirsk, Samara etc.), as well as other large cities, such as Krasnoyarsk, Vladivostok, Voronezh, Saratov, Irkutsk, Khabarovsk (all of them are the centres of the administrative regions of the Russian Federation) and Togliatti (the large centre of motor-car construction). All of these 20 cities have a large, international or all-Russian significance. Although the correlation between the expert opinion of the development potential and the number of residents of this or that city is very large, some cities have got a relatively higher (Kaliningrad/Konigsberg, Vladivostok, Irkutsk, Arkhangelsk, et al.), or lower (Ivanovo, Tambov, Saransk, Ryasan et al.), evaluation, judging by the development potential as would otherwise be indicated by the corresponding number of residents. The expert analysis affords a good opportunity of understanding what the contemporary important cities of Russia are (Those which bear the economic and social development of the country) and thereby of formulating a representatively new re-evaluation of the cities according to the present investment potential by demonstrating the further development possibilities within the framework of the economic and geopolitical transformational process in the strongly differentiated economic regions of Russia, including determining and typifying the centres according to their development potential (i.e., depressed, stagnant, prosperous). Key words: development potential of cities, Russian Federation.