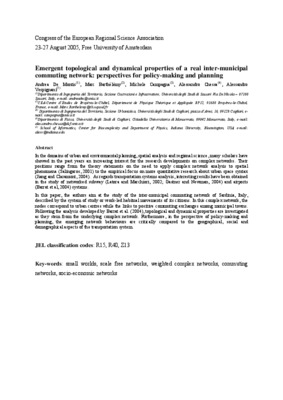 A variety of phenomena can be explained by means of a description of the features of their underlying network structure. In addition, a large number of scientists (see the reviews, eg. Barabasi, 2002; Watts, 2003) demonstrated the emergence of large-scale properties common to many different systems. These various results and studies led to what can be termed as the “new science of complex networks” and to emergence of the new “age of connectivity”. In the realms of urban and environmental planning, spatial analysis and regional science, many scientists have shown in the past years an increasing interest for the research developments on complex networks. Their studies range from theoretical statements on the need to apply complex network analysis to spatial phenomena (Salingaros, 2001) to empirical studies on quantitative research about urban space syntax (Jiang and Claramunt, 2004). Concerning transportation systems analysis, interesting results have been recently obtained on subway networks (Latora and Marchiori, 2002; Gastner and Newman, 2004) and airports (Barrat et al, 2004). In this paper, we study the inter-municipal commuting network of Sardinia (Italy). In this complex weighted network, the nodes correspond to urban centres while the weight of the links between two municipalities represents the flow of individuals between them. Following the analysis developed by Barrat et al. (2004), we investigate the topological and dynamical properties of this complex weighted network. The topology of this network can be accurately described by a regular small-world network while the traffic structure is very rich and reveals highly complex traffic patterns. Finally, in the perspective of policy-making and planning, we compare the emerging network behaviors with the geographical, social and demographical aspects of the transportation system.