Since 1989 Austria's economic activities in Central and Eastern Europe has intensified quite rapidly. Austria has not only achieved a high surplus in its balance of trade throughout the period 1990-96, it has also improved its foreign direct investment activities in these countries. The regional structure shows that investment activities have been intense in particular with the adjacent countries Hungary, the Czech Republic, Slovenia and Slovakia. Geographical proximity and close historical and cultural ties have enabled Austrian companies to achieve a considerable first mover advantage. The sectoral pattern indicates that investments have been performed mainly in services (trade, finance and insurance), construction, petroleum, non-metallic products and food and beverages. To investigate the patterns of these investments more specifically we have conducted a questionnaire by 1700 Austrian companies in the summer of 1997. The companies have been asked among others about their objectives of investment, number of employees in Austria and abroad, turnover, destinations of sales and their expectations of market developments. 283 surveys have been returned. This paper examines the returned surveys in particular by the strategic objectives of the investing companies. Such an analysis is carried out by region and industries. At least until now it seems to be the case that market-driven factors and strategic considerations are the ultimate objective of investments. Only a few sectors indicate that low labour costs are of importance. This is particularly the case within a 'core' industrial sector which consists of metal products, mechanical products, electrical and electronic equipment and motor vehicles. In addition these sectors indicate export shares to the European Union (EU) and to Austria which are well above the average. Local demand is rated less favourably. Hence this sector shows a much stronger dependence on supply-based driven objectives. However, until now this part of foreign direct investment has only been of minor importance. The paper will analyse the results for all four adjacent Central and Eastern European countries separately. 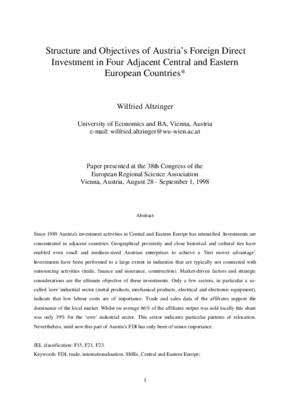