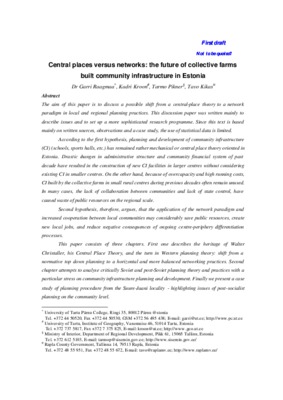 The aim of this paper will be to discuss possibilities to shift from a central-place theory towards to a network paradigm in local and regional planning practices. According to the first hypothesis, planning and development of social infrastructure (schools, sports halls, etc.) has remained rather central place oriented in Estonia. Even despite high and steadily increasing mobility (due to the rapidly spreading car ownership) and increasing share of city-population. The central-place approach would mean construction of overcapacity on the regional level. The social infrastructure built by the collective farms in rural areas has remained often unused already now, quite often because of the lack of collaboration between communes. The second hypothesis, therefore, argues, that application of the network paradigm and encouraging co-operation between local communes may considerably save public resources, create new jobs close to living estates, and reduce negative consequences of ongoing centre-periphery differentiation processes.