Restructuring of industrial economies in countries in transition: Experience of Ukraine

The transition of Ukraine and other CIS countries to an effective socially oriented market economy is delayed by dramatic economic and social problems of their restructuring. The restructuring problem is exclusively sever in industrial regions of Ukraine because of their dependence on technologically obsolete heavy industry sectors as well as due to the former economic development paradigm. Such regions will require a prolonged adaptation to market conditions, and discretionary state policy regarding to the regions, a special status of regional and local self-government. The objectives of the paper are as follows: * determining the priorities of economic restructuring in industrial regions of Ukraine with due regard to their social consequences; * elaborating of principles of the redistribution of powers on economic restructuring process among central, regional, and local governments; * substantiation of economic instruments and organizational forms for supporting structural changes and investment activity at regional level. Approaches to the restructuring of the industrial regions elaborated in the paper provide CIS countries with a basis for a long-run strategy of the transition of their industrial regions to a market and will reduce the political tension in these regions. They have been implemented in the number of programs for regional development adopted by the Ukrainian government for the Donbass, industrial heartland of Ukraine, and they are the subject for the detailed discussion in the paper as well. 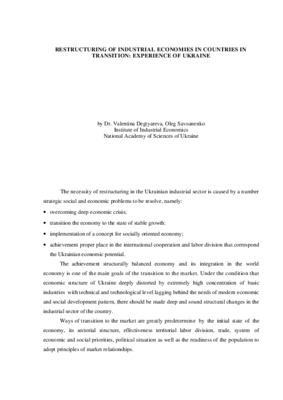