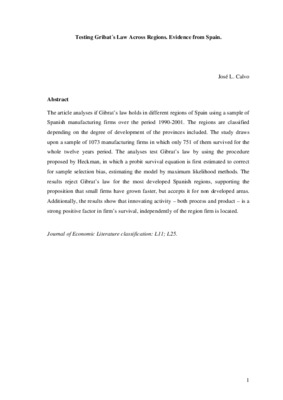 The article analyses if Gibrat’s law holds in different regions of Spain using a sample of Spanish manufacturing firms over the period 1990-2001. The regions are classified depending on the degree of development of the provinces included. The study draws upon a sample of 1073 manufacturing firms in which only 751 of them survived for the whole twelve years period. The analyses test Gibrat’s law by using the procedure proposed by Heckman, in which a probit survival equation is first estimated to correct for sample selection bias, estimating the model by maximum likelihood methods. The results reject Gibrat’s law for the most developed Spanish regions, supporting the proposition that small firms have grown faster, but accepts it for non developed areas. Additionally, the results show that innovating activity – both process and product – is a strong positive factor in firm’s survival, independently of the region firm is located. Journal of Economic Literature classification: L11; L25.