The geography of collaborative knowledge production: entropy techniques and results for the European Union

Economic development has become understood as being crucially dependent on knowledge production and innovation. Two important features of knowledge production concern its spatial concentration and its embeddedness in collaborative networks. The understanding of economic and scientific development thus requires indicators that capture the spatial and networked nature of knowledge production. This paper aims to contribute by developing and applying an integration measure that indicates the extent to which an organisation is integrated within a network. This measure, being based on the entropy of frequency distributions of collaborative projects, can be applied at any level of aggregation (cf. Frenken 2000). In this study, the focus of analysis is on European integration at the level of cities, countries and the European Union as a whole. The integration measure indicates the degree in which the observed distribution of collaborations differs from the distribution that would have resulted when partner selection would have been random (maximum entropy) indicating perfect integration. Using data taken from the Science Citation Index on inter-institutional collaborations in scientific output of EU countries in the period 1993-2000, European, national and regional patterns in scientific collaboration are analysed. The analysis in divided in three parts. The first part deals with the analysis of national and European collaboration. Results obtained so far (Frenken 2000) show that the European Union has indeed become more integrated, i.e. that the distribution of collaborations has become more random over time. Decomposition of the results shows that the higher level of integration has resulted solely from a more evenly distributed pattern of country-country collaborations, while the bias in national collaborations has not decreased. From a policy perspective, one could argue that European funding, for what concerns European collaborations, has indeed resulted in decreasing biases among countries, but has not resulted in removing the strong propensity of institutions to engage in national collaborative projects. In the second part, I examine the geographical nature of differences in the propensity to collaborate. The results obtained so far show that larger countries are typically better integrated than smaller countries. This can be understood from the assumption that scientific research in the larger countries is most diversified rendering its scientific institutes on average more attractive to collaborative with. This result, however, is not taken to mean that the propensity to collaborate internationally is solely affected by the national level per se. In so far as diversification is related to spatial concentration of scientific research, the same effect should be visible at the city level. This hypothesis is addressed by disaggregation of the data at the level of cities. The analysis will show to what extent collaboration is biased in cities and whether the scale of cities is indeed affecting the propensity to collaborate. Finally, in the third part, the pattern of clustering among cities can indicate the emergence of national and trans-European clusters of cities. The latter type of clusters allows border cities that are peripheral with regard to the national distribution to increase their science base by means of local yet European collaboration. To the extent that this is true, European science policy should take into account the regional embeddedness of European collaborative projects. Furthermore it would imply that localities that are peripheral both in the national and the European sense face serious problems as their propensity to collaborate is expected to remain low. References Frenken, K. (2000) 'A complexity approach to innovation networks', Research Policy 29, 257-72. Frenken, K. (2001) 'Measuring European integration in scientific research', Paper presented at the ECIS Conference 'The Future of Innovation Studies', Eindhoven, The Netherlands, September 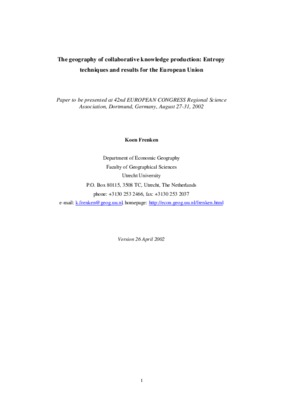