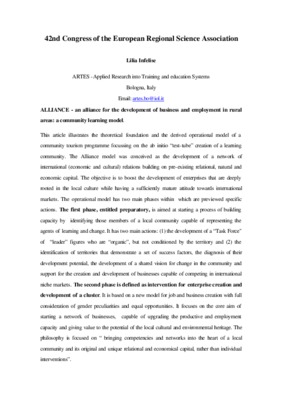 ALLIANCE - an alliance for the development of business and employment in rural areas: a community learning model.

The alliance model has been conceived as the development of a network of international (economic and cultural) relations building on pre-existing relational, natural and economic capital. The objective is to give a boost to the development of enterprises which are deeply rooted in the local culture while at the same time having a sufficiently mature attitude towards international markets. The theoretical and conceptual assumptions of the model are derived from essentially four theses: 1. Each process of innovation is an authentic process of individual and collective learning; 2. Each process of learning also contains a process of creative destruction; 3. The process is not sustainable over time, without in some way institutionalising the innovation which has been introduced; 4. Key learning/change initiators and facilitators have to be identified and involved as key actors. From this dynamic of the creation of innovative relational capital we can expect the development of: a managed process of generation, maintenance and capitalisation of high-quality know-how; an ever-more ready and diffuse acceptance of new practises and points of reference and the abandoning of habits which block innovation (creative forgetting); the expansion of entrepreneurial ability and co-operation capacity including that of women generally neglected; the development of a network of enterprises, leaded by women and families, able to compete in the context of international markets. The context of application the model has been applied to a context characterised by: a vocation turned essentially into a rural economy and with high potentiality for tourism; a weak productive capacity; relevant presence of young highly schooled population; rates of schooling degrees above the average; women willing to start a change /learning process aimed at the upgrading of their own role and that of their community; women and their networks willing to start businesses. The operational model is structured in two main phases to the inside of which are previewed various specific actions. The first phase, entitled preparatory, is aimed at the development of a task force, that is leader figures who are organic, but not conditioned by the territory. The second phase entailed in the model, is defined as intervention for enterprise creation and development of a cluster, and is aimed at the identification of those territories characterised by a set of success factors, the diagnosis of the territorial potentiality, the development of a shared vision for change in the community and the support to the creation and development of businesses capable to compete in international niches markets. This phase, based on an entirely new model for job and business creation with full consideration of gender peculiarities and equal opportunities, focuses on the core aim of giving start to a network of business, all interconnected by complementary links, capable to upgrade the productive and employment capacity and in the meantime give value to the potentiality entailed in the cultural and environmental heritage of the local community. The second phase of the model is composed by 4 key actions: recruitment, animation and orientation to entrepreneurialism, escort the job and enterprise development, making sustainability institutionalised.