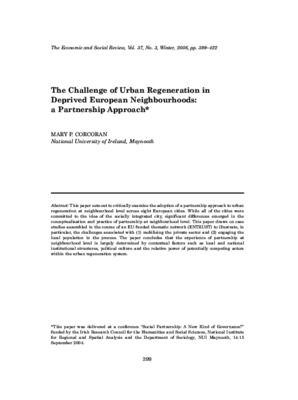 This paper sets out to critically examine the adoption of a partnership approach to urban regeneration at neighbourhood level across eight European cities. While all of the cities were committed to the idea of the socially integrated city, significant differences emerged in the conceptualisation and practice of partnership at neighbourhood level. This paper draws on case studies assembled in the course of an EU funded thematic network (ENTRUST) to illustrate, in particular, the challenges associated with (1) mobilising the private sector and (2) engaging the local population in the process. The paper concludes that the experience of partnership at neighbourhood level is largely determined by contextual factors such as local and national institutional structures, political culture and the relative power of potentially competing actors within the urban regeneration system.