This paper proposes a parsimonious methodology to evaluate the impact of large urban renewal projects on public revenues. The impact is largely endogenous, external to projects and may encompass a broad range of instruments, ranging from local to regional to central governments. We look at licence fees, user charges, piggyback levies, excise taxes, social security contributions, and taxation of property, corporate income, personal income, and sales or value added. All these revenues are labelled tax dividends for short. The evaluation of a project?s tax dividends may help governments on their licensing and, above all, on their co-financing decisions. However, the need for rigorous financial evaluations faces too many difficulties in practice, from modelling complexity to information shortages to time constraints to bureaucratic obstruction. The methodology in this paper aims precisely at delivering feasible, fast and reasonably sound assessments that can be computed before or after the projects? accomplishment. Revenue changes spring from the economic effects of renewal projects, which differ across space and time. Spatial effects are not restricted to the renewal site. Very often, they spill over to neighbouring city areas, and may also include region and nationwide outcomes. Most on-site effects are internalised by the developer but generate tax dividends too. The renewal project can also bring important benefits to adjacent city areas, because it either reduces a negative externality?pollution or crime, for example?or creates a positive externality?such as widely appraised amenities?for agents located therein. In the case of really large renewal projects, there may also be non-local effects to account for. In fact, the project?s own expenditure is likely to leak into regional and national suppliers, triggering macroeconomic consequences. Economic effects differ also on time, being temporary or permanent. The former come out of resource acquisition by the developer, and may include expenditure on planning, compulsory purchases, decontamination, demolition, and construction. Permanent effects on output occur because these projects increase the real value of capital in the economy. Real estate rents, on site and on neighbouring areas, capitalise the social net benefits of the renewal project. Hence, temporary effects are spatially diffuse and expand the economy in the short run. The methodology includes a tailored Mundell-Fleming design to quantify these effects. Permanent outcomes expand potential output, are normally restricted to an urban subspace and are quantifiable out of differential rents. The methodology is easily customisable to particular projects. As an example, we include an application to the large ongoing renewal project in Eastern Lisbon, Portugal, triggered by the 1998 world exhibition?Expo?98. Frequently, major renewal projects are prompted by a highly visible event, such as this exhibition or the Olympics. The event itself is likely to cause temporary effects, for example through its impact on the tourism sector? which is likely to boost within the city and its region. Our application shows also how to plug these effects into the analysis. 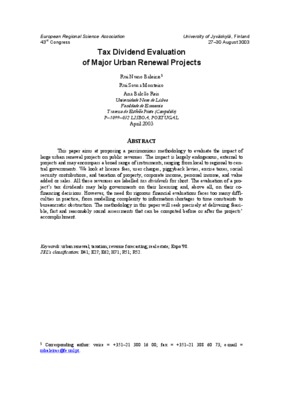