This paper will show the increasing convergence between cultural and economic discourses. On the one hand, art activities can be seen in an interdependent relationship between cultural industries and knowledge economy. On the other hand, there are regional economic effects of art and culture. Furthermore the actors play, as pioneers, a key role in the occupying of urban space to regenerate de-industrialised and seedy places. I take up the lifestyle concept with the definition of a creative class and a creative milieu. The concepts of the creative city facilitate access into the correlations between culture and the development of a city, by which creative locations become elicit. Questions, such as what are the special attributes of performing artists, what forms the basis of creative potential and what characteristics make creative areas in cities identifiable, will be broached. The performed survey focused on conditions on the real estate market, on the social and professional situation of artists and on market integration. This investigation should offer some information to Berlin’s policy makers to promote artists in their contribution to support the local creative scene, build local economies, develop communities and social cohesion, and as general image building. 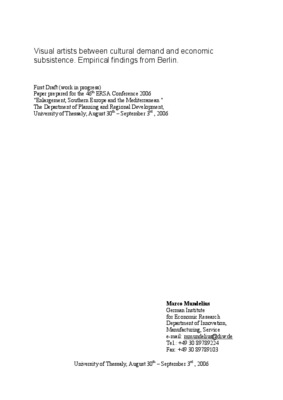