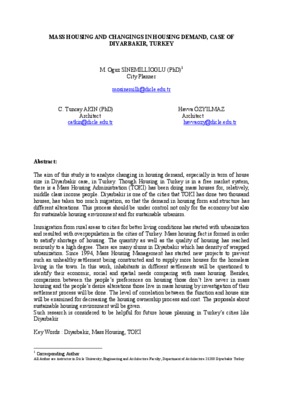 The aim of this study is to analyze changings in housing demand, especially in term of house size in Diyarbakýr case, in Turkey. Though Housing in Turkey is in a free market system, there is a Mass Housing Administration (TOKÝ) has been doing mass houses for, relatively, middle class income people. Diyarbakýr, one of the cities that TOKÝ has done two thousand houses, has taken too much migration, so that the demand in housing form and structure has different alterations. This process should be under control not only for the economy but also for sustainable housing environment and for sustainable urbanism. Immigration from rural areas to cities for better living conditions has started with urbanization and resulted with overpopulation in the cities of Turkey. Mass housing fact is formed in order to satisfy shortage of housing. The quantity as well as the quality of housing has reached seriously to a high degree. There are many slums in Diyarbakýr which has density of wraped urbanization. Since 1994, Mass Houing Management has started new projects to prevent such an unhealthy settlement being consructed and to supply more houses for the homeless Iiving in the town. In this work, inhabitants in different settlements wiil be questioned to identify their economic, social and spatial needs comparing with mass housing. Besides, comparison between the people’s preferences on housing those don’t live never in mass housing and the people’s desire alterations those live in mass housing by investigation of their settlement process will be done. The level of coorelation between the function and house size will be examined for decreasing the housing ownership process and cost. The proposals about sustainable housing environment will be given. Such research is considered to be helpful for future house planing in Turkey’s cities like Diyarbakýr.