"Europe's towns and cities remain its primary source of wealth creation and the centre of its social and cultural development. However there are rising problems relating to rapid economic adjustments. It is clear that new efforts are necessary to strenghten or restore the role of Europe's cities as places of social and cultural integration, as sources of economic prosperity and sustainable development, and as bases of democracy" ["Towards an urban agenda in the European Union", European Commission, 1997]. The environment of cities has become increasingly competitive and complex. Cities need to anticipate and respond quickly to opportunities and threats that influence their position structurally. Although city governments develop policies and strategies to meet the challenges, at the same time higher layers of government pursue policies that influence the position of cities. National governments draw up financial and policy frameworks and create conditions in which cities have to manoeuvre and design their own policies. At the European level the interest for the strategic position of cities within regional development policy is growing. This harmonises with a major objective of the association of large European cities ('Eurocities') to bring the position of the large cities as engines of economic growth and at the same time as concentrations of social problems to the attention of the Europan Commission. Although the Commission recognises the important role of cities for European regional development, until now European urban policy initiatives have been blocked by a majority of national governments, as a consequence of the principle of subsidiarity. The objective of our contribution is to compare current developments as far as explicit national urban policies in the member states are concerned. However the scope will not be limited to explicit policies alone. National policies with a substantial impact on urban development will be dealt with too. The framework for the investigation is made up of four parts. The first two parts compare national urban patterns and structures (the urbanisation pattern and the administrative structure), while the remaining parts deal with the questions: (1) what do national authorities consider to be main issues for, and challenges to their (larger) cities?; and (2) how do national governments respond to these issues and challenges by policies targeted to the role and function of cities? The results of our investigation into current national urban policies are for an important part based on fifteen national case studies produced by colleagues from each of the member states according to the framework mentioned before. This contribution summarises the results of the comparison. The results might give ingredients for a future urban policy at the European level. 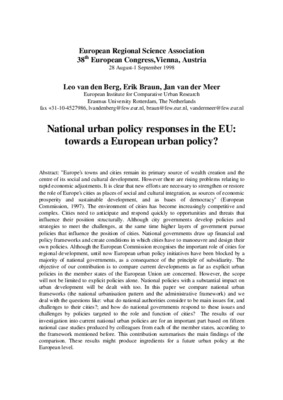