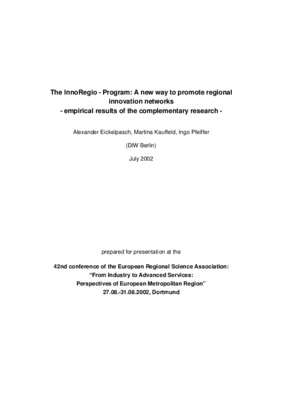 The InnoRegio-program: a new way to promote regional innovation networks - empirical results of the complementary research -

Ten years after German reunification the economic situation in the new Federal Länder is still unsatisfactory. New approaches are being sought in promotional policy so that the weaknesses that are known or suspected can be better targeted and removed. One of these weaknesses is the lack of research, and thconsequent shortage of innovation by companies. Another is inadequate regional cohesion between companies and related facilities. Formal and informal co-operation between the various regional protagonists is regarded as essential to strengthen corporate innovation and exploit the regional economic potential, and that means networking companies, research facilities, universities, the administration and politicians. In April 1999 the German Federal Ministry of Education and Research (BMBF) therefore launched a promotional initiative known as the InnoRegio. Prospective participants were invited to enter a competition for promotion funds by putting forward concepts for the development of innovative regional joint ventures or associations. During the period from 1999 to 2005 the BMBF will provide a total of 255 million for this Initiative. Thus, the InnoRegio-Contest is the most important pillar of the ministry's innovation policy for East Germany. In the course of 2001, two further measures have been added to the promotion of regional innovative networks, "Innovative Regional Growth Cores" and "Interregional Alliances". The implementation of the InnoRegio Initiative will be monitored by complementary research until 2005 which is conducted by the DIW Berlin. This article outlines the concept of the promotion and selected empirical results of the development of the InnoRegio networks and the establishments involved. Finally, some conceptual differences between the three programs mentioned and their relation to innovation policy as well as regional policy in Germany are discussed.