Olive Tree Farming in Jaen: Situation With the New Cap and Comparison With the Province Income Per Capita.

Jaén (province belonging to European Union) represents more than 15% of the Spanish production of olive oil, around 7% of European Union olive oil and more than 5% of the world production. Olive oil represents more than 90% of the income in Jaen agricultural sector and agricultural sector contributes with 15% of GDP province in 2003. The aims of this paper is to show the evolution of the main socioeconomic variables of this farming during the nineties decade in one province belonging to the most significant region in the world and compare during the nineties the income per capita in this province with the income in the olive oil. The variables analysed in each plantation are: productivity or cultivation yield on Hectare; labour work; cultivation expenses without including labour work; Agriculture Common Policy subventions; standar gross margin (according to directions of the European Union Agriculture General Board) and net margin. On the other hand, the main macroeconomics variables used are: Gross Internal Product, Population, labour work and productivity of labour. The information farms reflected in this paper is based upon four investigations and previous research carried out by the same authors. The secondary data has been got from Institutions and Public Statistics from Andalusian Regional Government. The original investigations were funded by the Department of Agriculture of the Andalusian Regional Government -ConsejerÃ­a de Agricultura y Pesca de la Junta de AndalucÃ­a- and La General (one of the savings bank in Spain). It has consisted in four surveys during the years 1991, 1994, 1999 and 2000. The first step in the methodology has been to design the sample and questionaires, after that, field camp was implemented and data processing, creating for that purpose an information system pattern (simulator-programme). Results files, ordered according to user’s likes, can be incorporated to other systems or be analysed with conventional statistics software (SPSS for instance). Main results are shown in charts and tables. After getting results we project the predictable Common Organisation of the Market (CMO) reform on olive tree farming. The recent reform of olive oil will reduce the subventions and the income of the farmer. And we also show the impact of that reduction on farming margins and the consecuences in the income per capita province. 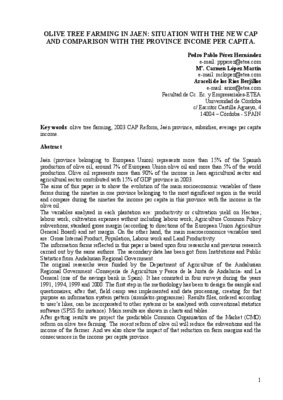