Repeated demands by both the European Parliament and the EU Member States nonwithstanding, responsibility for European spatial development policy remains unclear. Spatial development on the European level is actually “treated” as a coincidental outcome of EU sector policies. No unit exists in the European Commission with which to co-ordinate the spatial effects of Community policies. It is obvious that the lack of co-ordination between Community policies causes complex problems – in regard to the effective assignment of financial subsidies as well as the goals of Community sector policies. The spatial effects of these policies do not automatically complement each other, along the line of a more balanced regional, respectively spatial, development among European Union Member States. In particular after the declaration of territorial cohesion as one of the core Community objectives in the Treaty establishing a Constitution for Europe, co-ordination of Community policies is necessary more than ever. The European Spatial Development Perspective (ESDP), adopted by the Ministers for Spatial Planning at the Potsdam Council in 1999, was a milestone in this respect. However, in terms of the co-ordination of European policies, the ESDP has had a only minor impact. Therefore, further, more ambitious steps have to be undertaken. A co-ordinating body on the European level could help to duly consider the wide spectrum of aspects of spatial development. It offers the chance to raise sectoral policies to a higher level of spatial effectiveness and serves to promote the better use of financial assistance. In contrast, a co-ordination strategy based up on the assumption of a strong commitment of the member states via voluntary co-operation is also worthy of consideration. It is urgently necessary to discuss the type of organisation, the form and content of the co-ordination of spatially relevant policies in terms of sustainable and comprehensive European spatial development and to decide on how to approach their implementation. This is especially true against the backdrop of the eastern EU expansion and its associated challenges. 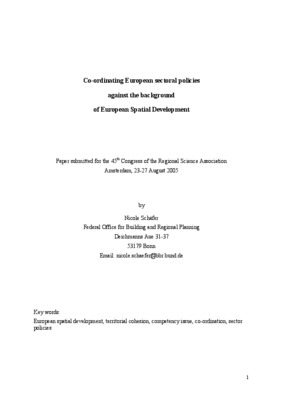