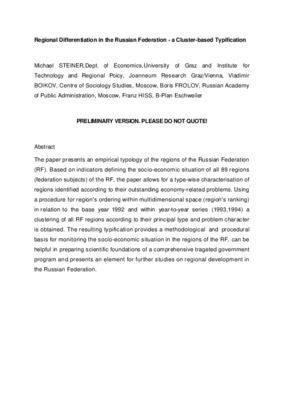 Regional differentiation in the Russian federation: A cluster-based typification

The paper gives a socio-economic analysis of the 89 regions of the Russian Federation. This analysis is implemented in four steps: 1) elaboration of a set of indicators defining the socio-economic situation in all 89 regions of the Russian Federation plus procedures to replace groups of correlated indicators with single estimated (synthetic) targets 2) preparation of the procedure for regions' ordering within multidimensional space (regions' ranking) in relation to the statement base year 1992 and within year-to-year series (1993,1994) 3)clustering of all Russian Federation regions according to their principal types and drawing on the regional typification and providing a rationale for the sorting out of backward and prosperous regions, those in depression and those considered to be border areas 4)description of the problem character of the specific types. The resulting typification . provides a methodological and procedural basis for monitoring the socio-economic situation in the regions of the Russian Federation . can be helpful in preparing scientific foundations of a comprehensive trageted government program . presents an element for further studies on reguonal development in the Russian Federation.