Some of the most controversial effects of China's post-1978 economic reforms have been on regional income disparities and on the divide between urban and rural development. How important are those income disparities? And how do they affect the elderly, who are perhaps the most vulnerable to the changes brought by China’s transition? What is the government’s role in providing income support? This paper examines the rural-urban disparities in income, expenditures, and government support among the elderly in China. We test for significant differences in levels and sources of income and in types of expenditures using a nationwide survey on rural and urban elderly conducted by China’s Elderly Scientific Research Center in 1992. This survey consists of two separate sets of responses, one for urban areas (9,889 respondents) and the other for rural areas (10,194 respondents), and provides demographic, socioeconomic, and health characteristics of the elderly. In addition, we propose to investigate the type and level of government income support programs at the local and state level. The findings are evaluated and policy implications discussed in the context of China’s transition to a market economy and choice of development strategies. 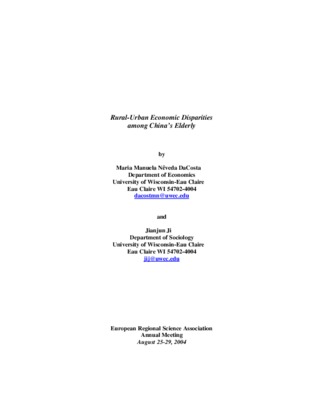