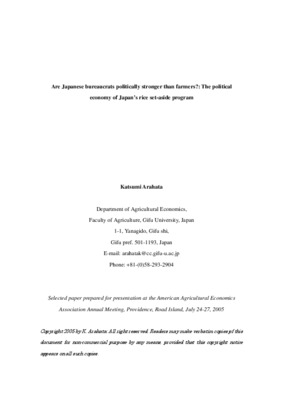 The purpose of this paper is to examine the political process of bureaucrats' seemingly discretionary allocations among prefectures in Japan's rice set-aside program. Some hypotheses and a model are proposed and then these are empirically tested. Two major findings of this study are as follows: Firstly, it is suggested that the bureaucrats' discretionary allocation tends to be revised in response to political pressure. Consequently, allocations among prefectures tend to be inversely proportionate to the degree of political pressures. Moreover, such pressures can be explained by the expected income from rice-production and the share of part-time farmers, who are the majority in Japanese rural society and politically powerful. Secondly, among various factors which are publicly announced as those used in the calculation of allocation, it is suggested that those which may naturally reflect the market mechanism remain influential even after revision. Similarly, the factors which are contrary to the market mechanism, such as the share of full-time professional farmers, become less influential.Rice set-aside program, Bureaucrats' discretion, Uneven allocations, Public choice, Political actors, Agricultural and Food Policy, Q180, H890,