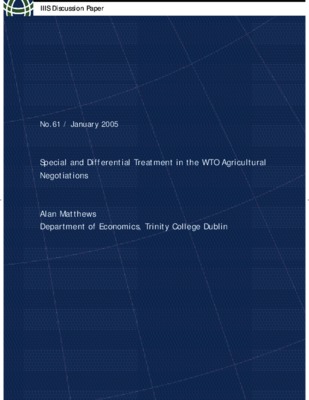 Special and Differential Treatment in the WTO Agricultural Negotiations

This paper examines the case for special and differential (S&D) treatment for developing countries within the WTO Agreement on Agriculture and the particular instruments or exemptions it should contain. The S&D treatment currently allowed to developing countries in the Agreement and the use they have made of it is first described. The range of proposals put forward by developing countries (and by development NGOs in developed countries) is summarised, and the S&D provisions in the August 2004 Framework Agreement for Establishing Modalities in Agriculture are outlined. The reasons why developing countries want special and differential treatment under the AoA are discussed. Some of the main proposals in the Development Box are then reviewed in the light of the justifications presented by its proponents. The paper concludes that the potential exists in the Framework Agreement to take a significant step towards “operationally effective and meaningful provisions” for S&D treatment. While noting this positive outcome, the important objective for developing countries of gaining a reduction in the trade-distorting support and protection by developed countries should not be forgotten. Classification-CGE model, Doha Round, agriculture, tariff preferences, domestic support.