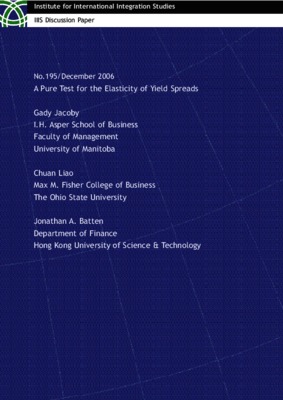 A Pure Test for the Elasticity of Yield Spreads

By Gady Jacoby, Chuan Liao and Jonathan A. Batten
Get PDF (994 KB)

The correlation between interest rates and corporate bond yield spreads is a well-known feature of structural bond pricing models. Duffee (1998) argues that this correlation is weak once the effects of call options are removed from the data; a conclusion that contradicts the negative correlation expected by Longstaff and Schwartz (1995). However, Elton et al. (2001) point out that Duffee's analysis ignores the effects of the tax differential between U.S. Treasury and corporate bonds. Canadian bonds have no such tax differential, yet, after controlling for callability, we find that the correlation between interest rates and corporate bond spreads remains negligible. We also find a significant negative relationship for callable bonds with this relationship increasing with the moneyness of the call provision. These results are robust under alternate empirical specifications.Bond Yield Spread, Default Risk, Callable Bonds, Corporate Bonds