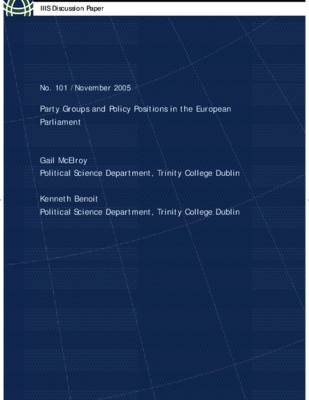 Party Groups and Policy Positions in the European Parliament

By Gail McElroy and Ken Benoit
Get PDF (307 KB)

As the legislative body of the European Union, the European Parliament groups 732 elected representatives from over 170 national political parties from 25 member states. At the EP level, these members are affiliated with seven major party groups representing distinct policy positions. In this paper we provide precise estimates of these policy positions based on expert surveys in addition to characterizing the dimensionality of policy competition in the EP. Our results suggest not only that party groups have identifiable and differentiated positions on multiple issues of policy, but also that these positions group broadly into two orthogonal dimensions: one consisting of classic left-right social and economic issues, and the other related to the powers and scope of EU institutions.Party Competition, Policy Positions, European Parliament, Expert Surveys.