Retirement and the Poverty of the Elderly in Portugal

The effect of retirement on economic welfare, indirectly measured by income, has not been studied widely, namely due to the lack of longitudinal data. A large literature exists about poverty in old age, mainly based on cross sectional survey data, but usually those studies are not able to study the transitional effect of retirement on income as they do not observe the workers who do retire before and after their retirement. The knowledge of this phenomenon is, however, of crucial relevance given the growing number of elderly people, the trend towards earlier retirement, and continuing relatively high poverty rates among the elderly. This paper analyses the association between transitions into retirement and the probability of becoming poor, considering different definitions of low income and of retirement, following what has been proposed in the literature. It is based on longitudinal data from the European Community Household Panel (ECHP) for Portugal survey waves 1-8 covering 1994-2001. Taking advantage of the longitudinal nature of the data used, we consider how the process of becoming retired is associated with an increased risk of having a low income, focusing on changes in the years immediately before and immediately after retirement for people who retire. The analysis is then focused on a sample of people who do retire during the analysed period. The paper starts by presenting evidence comparing low income incidence among retired people and the rest of the population on each of the waves of ECHP. Afterwards it analyses some factors associated with the changes in individuals’ income over a number of years around retirement. The dynamics of household income changes for people who retire are studied and which personal and household characteristics are associated with a higher risk of having low income in the years around retirement are explored. Finally, a multivariate probit model of the probability of entering low income at the time of retirement conditional on not having a low income before retirement is estimated.Retirement; poverty dynamics; Portugal; old-age social protection; income mobility. 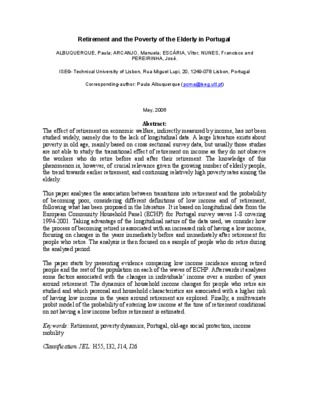