Basel III – responses to consultative documents, vital aspects of the consultative processes and the journey culminating in the present framework (Part 1)

Parts I and II of this paper are aimed at providing a comprehensive overview of, and responses to, four very vital components of the consultative processes which have contributed to the new framework known as Basel III. The papers will approach these components in the order of the consultative processes, namely, the capital proposals, the liquidity proposals and the Proposal to ensure the loss absorbency of regulatory capital at the point of non-viability. The capital proposals comprise proposals aimed at strengthening the resilience of the banking sector, the proposal relating to international framework for liquidity risk measurement, standards and monitoring and, the countercyclical capital buffer proposal. Whilst the capital proposals have been welcomed, there has been growing realization since the aftermath of the recent Financial Crisis that banks which have been complying with capital adequacy requirements could still face severe liquidity problems. As well as highlighting the importance of introducing counter cyclical capital buffers, the response to the countercyclical proposal draws attention to the need for greater focus on more forward looking provisions, as well as provisions which are aimed at addressing losses and unforeseen problems attributed to “maturity transformation of short-term deposits into long term loans.” The Committee's acknowledgement of negative incentives arising from the use of external ratings to determine regulatory capital requirements and proposals to mitigate these incentives is well - founded – however, regulators will also be able to manage, with greater ability, systemic risks to the financial system during such periods when firms which are highly leveraged become reluctant to lend where more market participants such as credit rating agencies, could be engaged in the supervisory process.counter cyclical buffers; credit ratings; credit rating agencies; liquidity risks; pro cyclicality; loan loss provisions; financial crises; bank; regulation; leverage; capital; insolvency; financial crises; moral hazard; Basel III 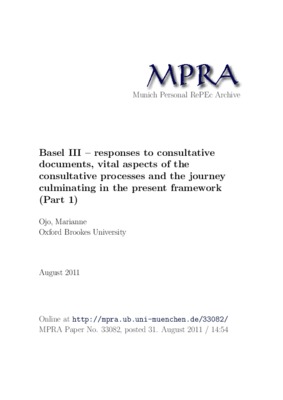